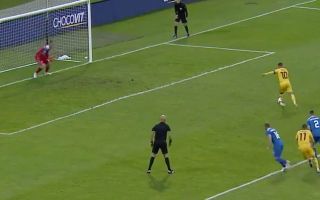 After scoring a stunning goal against Scotland last time out, Eden Hazard opened his UEFA Nations League account for Belgium against Iceland on Tuesday night.

The 27-year-old has been in fine form for his country over his last 40 appearances, scoring 21 goals and providing 17 assists as he continues to emerge as their talisman.

After Man Utd striker Romelu Lukaku was dragged down inside the box, it was down to Hazard to find the breakthrough for his side in their League A, group 2 encounter with Iceland.

As seen in the video below, he made no mistake from the spot as he sent the goalkeeper the wrong way to cooly slot home his penalty and give Belgium the lead.

Having swept Scotland aside on Friday night with a 4-0 win at Hampden Park, it was time for the competitive action this time round and Roberto Martinez’s side certainly look on course to make a positive and confident start to their campaign.

With Hazard continuing to be decisive, Chelsea fans will undoubtedly be hoping that he can repeat the trick when they take on Cardiff City on Saturday.

It took less than half an hour for Eden Hazard to his UEFA Nations League account!

He slotted away the penalty after Romelu Lukaku was fouled in the box. ???