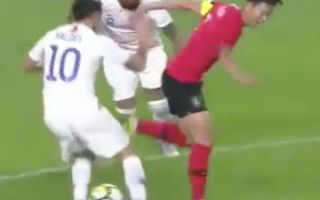 After helping South Korea triumph in the Asian Games earlier this month, Heung-Min Son was back in action for his country against Chile on Tuesday.

Tottenham will undoubtedly be ready to welcome the 26-year-old back with open arms to give them a boost after his recent absence, but he still had time to produce this outrageous bit of skill.

After initially evading the attention of Arturo Vidal who slid in to get back possession, the South Korean international still had the composure and calmness to steady himself and produce an incredible nutmeg on Diego Valdes to leave him red-faced and keep possession.

The game eventually ended in a goalless draw, and so this was certainly a stand-out moment in the clash as Son continues to dazzle.

Having been instrumental for his country in recent weeks though, Spurs will be desperate to get him back to north London so that he can continue to be an influential figure for Mauricio Pochettino’s side having bagged 18 goals and 11 assists in 53 appearances in all competitions last season.