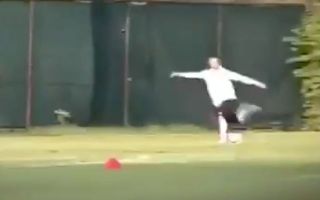 Loris Karius endured a rough few months at Liverpool after his blunders in last season’s Champions League final, and a move to Besiktas was supposed to take the spotlight off him.

Instead, the German goalkeeper has found himself a viral hit for all the wrong reasons again as teammate Ricardo Quaresma has left him red-faced in training.

As seen in the video below, the Liverpool loanee could only watch the ball sail over his head as the Portuguese star attempted a cheeky rabona finish and managed to pull it off perfectly.

Naturally, it’s gone viral since and will only serve to add further misery for Karius who is looking to rebuild his confidence and reputation in Turkey after moving on a two-year loan deal.

With the level of scrutiny in England after his mistakes last season and in pre-season earlier this summer, a move away was undoubtedly a sensible idea. However, Karius probably wasn’t expecting to still be in the headlines for moments like this…