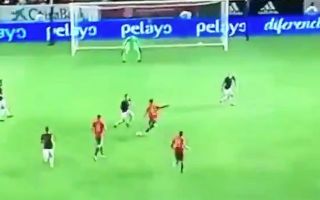 Spain are making a fine start to life under Luis Enrique as they produced a rampant display in the first half of their clash with Croatia on Tuesday night.

After securing a 2-1 win over England last time out, they made short work of the World Cup finalists as they headed into the half-time interval with a 3-0 lead.

Saul Niguez broke the deadlock early on before Real Madrid playmaker Marco Asensio took centre stage with two superb strikes to give his side a commanding lead.

The first was an absolute beauty, as seen in the video below, as the 22-year-old struck it sweetly and watched as it flew into the back of the net.

He was a little more fortunate with his second as it bounced in off the back of the goalkeeper, but he’s evidently relishing playing a key role under Enrique thus far as Spain looked very impressive in the opening 45 minutes on Tuesday night.