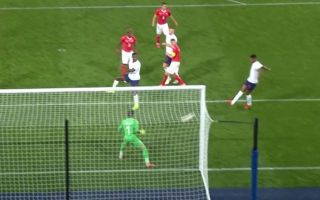 After a drab opening 45 minutes, England came out with more purpose in the second half as Marcus Rashford gave them a lead against Switzerland.

The two sides met at the King Power Stadium for their international friendly, with the Three Lions looking to bounce back after their loss against Spain at the weekend.

Gareth Southgate perhaps didn’t get the answers that he was looking for in the first half which was rather subdued, but it took a matter of minutes for Rashford to break the deadlock after the interval.

Following a brilliant delivery from Kyle Walker to pick him out from the right side, Rashford kept his cool at the back post to slot the ball home into the back of the net and give his side the lead, as seen in the video below.

Having made plenty of changes, Southgate will have been eager to see his players take their chance and so the Man Utd forward will be delighted to have gotten on the scoresheet. Evidently, he excels playing on home soil as all five of his international goals have now come in England.