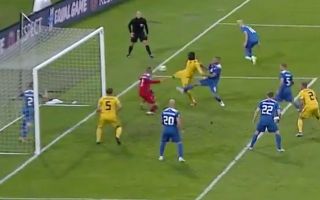 Belgium striker Romelu Lukaku got himself on the scoresheet against Iceland after forcing an effort over the line to double their lead.

The Man Utd star was in the thick of the action as he was crucial in the build-up to the opening goal too, with the referee judging him to have been fouled in the box as Eden Hazard stepped up to break the deadlock.

After playing his part in that goal, Lukaku decided to take matters into his own hands as after Vincent Kompany saw his header saved, his compatriot was on hand to pounce as his effort crossed the line before it was cleared away, as seen in the video below.

In turn, United fans will undoubtedly hope that he can bring his goalscoring boots back with him as they prepare to face Watford on Saturday evening while Belgium look on course to make a positive start to their UEFA Nations League campaign.

Another @premierleague star gets on the scoresheet for Belgium…just! ?

It took less than half an hour for Eden Hazard to his UEFA Nations League account!

He slotted away the penalty after Romelu Lukaku was fouled in the box. ???