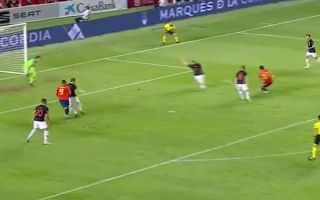 Spain were in a relentless mood against Croatia as Isco put them 6-0 up with Real Madrid’s star players all standing out in the victory.

As seen in the video below, the classy playmaker’s first touch set him up perfectly before he produced an excellent finish to get his name on the scoresheet.

It came after Marco Asensio and Sergio Ramos had already scored goals in an impressive outing for Luis Enrique’s men, with the former turning provider on this occasion to set up Isco for his goal as Julen Lopetegui would undoubtedly have enjoyed what he was seeing.

After defeating England at the weekend and having now followed that up with a commanding win over World Cup finalists Croatia, Enrique and his players will undoubtedly be delighted with the way his tenure has started.

Naturally, the important thing will be to see consistency and performances being delivered on the big stage when it matters. Nevertheless, as far as first impressions go, the former Barcelona boss hasn’t done a bad job of it at all as Spain look set to play some excellent attacking football under his stewardship.

Isco will hope to be a key figure in his plans, and he hasn’t made a bad impression at all thus far…