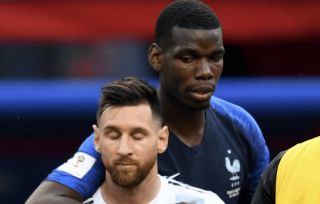 The France international remains a target for Barcelona, say Don Balon, and that has Rakitic worried about his place in Ernesto Valverde’s side.

Messi, however, has moved to assure Rakitic that he views him as an instrumental member of this team and has also communicated this to the club, according to Don Balon’s report.

It remains to be seen how this might affect the Catalan giants’ plans to sign Pogba, who is younger than Rakitic and a slightly different style of player.

What does the future hold for Ivan Rakitic?

It’s not impossible to imagine there might be a way for Valverde to fit both into his Barcelona XI, though with Sergio Busquets likely to be undroppable and with Arturo Vidal only joining as another option in midfield this summer, someone has to make way.

Rakitic has been a great servant to Barca since he joined from Sevilla in 2014, and it would seem a tad harsh if the club were to try to phase him out by bringing in Pogba.

Messi will hope his intervention can do something to ensure the Croatian remains a key member of the team.