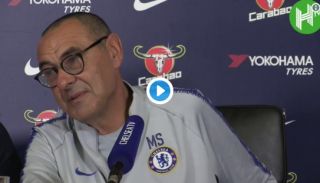 Chelsea manager Maurizio Sarri has bizarrely claimed he could at some point decide to quit smoking – but not for more than one or two years.

The Italian tactician is a known chain-smoker and has been pictured puffing away on the sidelines during his time in Serie A.

However, in the video clip below, Sarri told a press conference that he would only likely quit for a short time before starting up again.

The former Napoli boss seemed to see the funny side of this, admitting that he’s had people like his father telling him to stop smoking for a long time without any success.