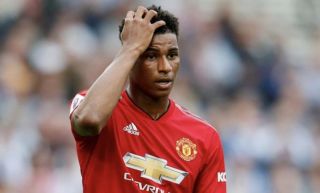 Rashford has started just one of United’s opening four matches in the Premier League this season, featuring in a further two as a substitute. It seems as though Jose Mourinho is happy to keep using the Englishman sparingly, just as he did last term when he restricted him to just 17 starts in total.

32 goals in 116 appearances for the Red Devils so far suggests that the 20-year-old has the talent to emerge as the club’s main striker eventually, however, it seems unlikely that he will overtake Romelu Lukaku in the pecking order at the club anytime soon. Mourinho has often deployed the striker in wide areas, which has stifled his overall impact on the pitch, despite still managing to produce fleeting moments of magic on occasion.

SEE ALSO: Man United attacker uses Mourinho’s favourite word to defend his managerial style
Real Madrid star reveals how much he wanted to leave club amid Man United and Chelsea interest this summer
Big injury boost for Man United as key star may be available for Watford clash on Saturday

One man who believes that Rashford might be forced to look elsewhere in search of regular football is ex-Red Devil Dion Dublin, who played up front for the club between 1992 and 1994.

“For Rashford, who is a lot more naturally talented than I was, has got a better chance of getting in that first team than I ever did.

“It’s down to him as an individual, but if he wants to play for his country, every game, we need to see more of him.”

The England international will miss the next three fixtures in United’s schedule after being harshly sent-off against Burnley at Turf Moor, starting with Saturday’s clash against Watford at Vicarage Road.

Supporters will hope that when he finally returns to the squad he can re-discover his best form in the famous red shirt and start to force his way into Mourinho’s starting XI, especially given the fact that United have lacked pace in the final third for much of the last month, which he can offer in spades.