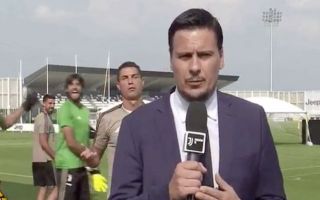 Ahead of leading Juventus against Sassuolo this weekend, Cristiano Ronaldo decided to have some light-hearted fun after training on Thursday.

On one hand, you could argue that the Portuguese ace is 33 years of age and should probably be past this phase in his life. However, we’re not about to begrudge him having a bit of a laugh.

Things will get a bit more serious on Sunday though as although Juve have collected maximum points from their opening three games of the campaign, their marquee summer signing has yet to find the back of the net in those outings.

In turn, he’ll be desperate to break his duck sooner rather than later, but it won’t be easy against Sassuolo who have also started the season well and are unbeaten.

Nevertheless, it’s good that Ronaldo’s staying in good spirits and joking around, as opposed to letting his barren start to life in Italy affect his confidence.