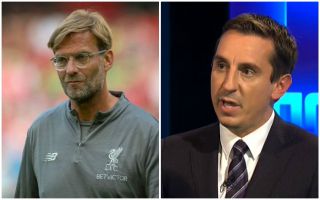 Jurgen Klopp has hit back after Gary Neville suggested that Liverpool should sacrifice the Champions League this season to have a real go at winning the Premier League title.

As noted in his column for The Times, the pundit suggested that particularly given the style of Liverpool’s play, it could take its toll on them this year and see them suffer near the end of the campaign.

In turn, if they wish to end their long wait for a league title, Neville suggested that they may have to consider sacrificing their European commitments in order to focus in on the Premier League having made such a positive start as they look a genuine threat to champions Man City.

While it’s easy to understand where he’s coming from if the priority is to win the league, it has to be said that Klopp’s bemusement is also understandable as it’s difficult to see how Liverpool could prioritise one competition over another and not risk it back-firing.

Given the additions that they made this past summer with the signings of Fabinho, Alisson, Naby Keita and Xherdan Shaqiri, they may well feel as though they have the quality and depth required to now compete on all fronts and sustain their push.

Time will tell if that’s the case or if Klopp possibly takes the cup competitions less seriously in order to focus in on the important objectives, one of which is surely their European run.

Jurgen Klopp does not need advice from Gary Neville. pic.twitter.com/Y2nhuG50Zf