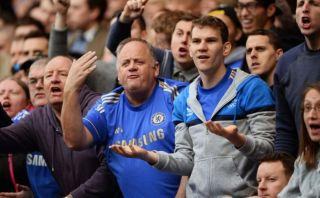 Maurizio Sarri made the decision to drop Alvaro Morata for Olivier Giroud this afternoon, as these Chelsea fans were quick to question his decision.

Morata has struggled for form ever since his move to Stamford Bridge from Real Madrid last summer, and it seems like Sarri has already had enough.

The Spaniard has only scored once so far this season, as the Blues sit joint second in the Premier League alongside Watford.

The Spaniard’s less-than-impressive displays for the west London club may have played a part in Sarri choosing to drop him for today’s Premier League clash against Cardiff.

The Welsh side are hardly the most difficult side Sarri’s men are going to play this season, and this game could’ve been the perfect opportunity for Morata to score some goals and get his confidence back.

However, it seems like Sarri isn’t taking any chances with the 25-year-old, and has elected Giroud to lead his side’s attack this afternoon.

Here are a few select tweets from Chelsea fans question Sarri for his decision to drop Morata today.

And in fairness, we sort of agree with them…

SARRI FUCKING OUT WHY IS GIROUD STARTING

Don't understand why Sarri has dropped Morata for Giroud. Surely it should be Willian coming in for Morata. Giroud better to come off the bench for situational football.

Morata is needed for link up & energy, Giroud is needed once we get desperate
This is just an awful selection & will destroy Morata's confidence

No need to have benched Morata today and just upset his confidence. Chelsea in general have struggled against defensive teams, and Morata hasn't been afforded much chances to score. I'd like to see if Giroud differs.

Morata should not have been dropped

Sarri should've persisted with Morata at least for one more game. Cardiff are the first team playing a normal back 4 against us this season, it would've been an opportunity for him to get goals and confidence. Given how mentally weak Morata is this could wreck his season.