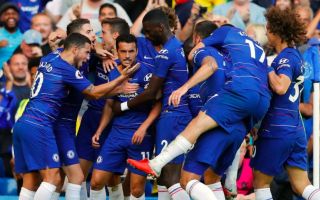 A large number of Chelsea fans are pretty convinced Alvaro Morata’s never getting back in the starting line up again after Olivier Giroud’s performance against Cardiff City today.

The France international has come in for a rare start for Chelsea today, and has clearly impressed these supporters after playing a part in giving the Blues a 2-1 first-half lead.

Giroud has long been known for his superb link-up play as a target man, and looks a far better option for CFC than Morata ever has.

The Spaniard has been a big disappointment since his transfer from Real Madrid last season, and has just one goal so far this season, offering little else on the pitch either.

Giroud, meanwhile, has never been the most prolific, but has plenty of physical presence and intelligence to his play to get the best out of surrounding forward players and wingers like Eden Hazard, who has two goals this afternoon.

Is this the end for Morata after Giroud’s emphatic display today? These fans certainly think so…

Morata is never getting off the bench. Giroud >>>>

Morata may aswell inscribe his name on the bench

Morata should never start for Chelsea ever again

Hazard ain't playing with nobody . Giroud should never sit out a game for morata again

If Morata was on the pitch then hazard would not have got them 2 goals, Giroud and hazard are awesome together #CHECAR #KTBFFH

Giroud with two assists in 45 minutes in his first start under Sarri. Far better than Morata.

Morata's bench will come with a mattress now