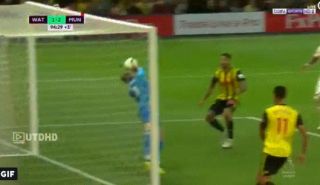 Here’s a video of that ridiculous save from Manchester United goalkeeper David de Gea against Watford today.

The Spanish shot-stopper has long been regarded as one of the very finest players in the world in his position, having been a crucial servant for United.

MORE: Video: Rio Ferdinand hits back at lack of respect shown to this Manchester United star

And he came up trumps again today with this late stop to deny Watford what looked a certain equaliser as they piled the pressure on.

De Gea has made so many saves like this that it almost seems routine now, but this really is worth watching over and over again.

Speaking afterwards, Jose Mourinho was full of praise for his ‘keeper, stating this is an example of why his ‘keeper is ‘the best’.

‘That is the reason why he is the best,’ the Portuguese is quoted in the Metro.

‘That is why he is Manchester United’s goalkeeper and when you are goalkeeper of a big team, even if you don’t touch the ball for the whole game you have to be decisive.’