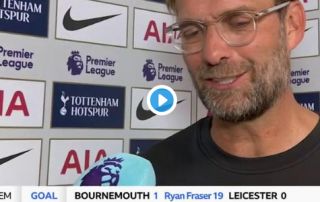 Liverpool manager Jurgen Klopp found just one small negative from today’s 2-1 win away to Tottenham, and Reds star James Milner echoed that sentiment in his tweet after the game.

Despite Liverpool making it five wins out of five to continue their superb start to the season, there is definitely the feeling today that they could have done more to kill the game off.

MORE: Liverpool do something they’d only done twice in their entire history with win in record-breaking Tottenham fixture

LFC went 2-0 up against Spurs at Wembley before conceding late on to ensure a bit of a nervy finish.

Having been so dominant throughout, the visitors could really have scored more and on another day they could be punished if they take their foot off the gas a little late on.

See the video below as Klopp discusses the win…

And here’s Milner’s response to the win…

Another great away win – but should have been out of sight!
Great support as always ??#keepitgoing#YNWA#nextupPSG pic.twitter.com/t8AH5clnGJ