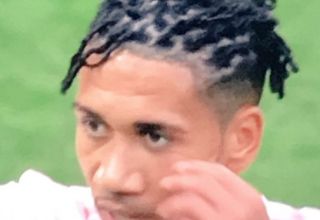 These Manchester United fans are crediting Chris Smalling’s edgy new haircut on his superb goal against Watford this afternoon.

The England international has never exactly been the most flashy character on or off the pitch in his time at Old Trafford, but he scored an absolute banger this afternoon at Vicarage Road.

Romelu Lukaku netted first with a scrappy close-range finish, before Smalling looked more like Robin van Persie with a neat touch on the chest before smashing the ball in with his left foot from close range.

Some United fans now think his new flashy haircut has given him superpowers and are urging him not to cut it off!

Others, however, think it looks pretty bad but are willing to forgive him after his fine effort to make it 2-0 in today’s game against an in-form Watford side.

Here’s a selection of the best tweets about Smalling and his hair, which one can only imagine has Graeme Souness seething with rage somewhere…

THAT NEW SMALLING HAIRSTYLE TURNED HIM INTO A NUMBER 9 LMAOOO

When you see Chris Smalling, Marouane Fellaini and Paul Pogba celebrating with their hair and their celebrations. pic.twitter.com/YaDwMdx3QI

Smalling is like a different player with this hair #MUFC

That hair is giving smalling something. What a finish

The hair has activated Smalling, Lukaku cannot chest like that.