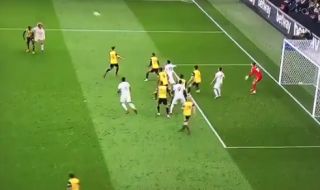 Manchester United have scored a quickfire double against Watford today, with Romelu Lukaku and Chris Smalling coming up with the goals.

First, a rather fortunate effort bundled in off Lukaku’s stomach for the opener at Vicarage Road.

Moments later, defender Chris Smalling got forward to volley in a superb effort from close range after taking the ball down on his chest.

Not often you see a good tummy finish! #lukaku pic.twitter.com/UPVwKKPIFd

Jose Mourinho hasn’t had the happiest of starts to the season this term, but was visibly thrilled with his side as he had these fans delighted with his passionate celebrations…