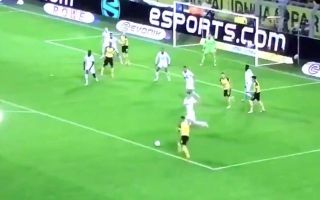 Barcelona loanee Paco Alcacer made an ideal start to life with Borussia Dortmund after scoring in their 3-1 win over Eintracht Frankfurt.

The 25-year-old struggled to make his mark at the Nou Camp, scoring 15 goals in just 50 appearances across two seasons with the Catalan giants after joining from Valencia in 2016.

However, he’s now been given a chance to showcase his quality with Dortmund after sealing a loan move to join the German outfit last month, and it appears as though he may well relish the opportunity.

As seen in the video below, Alcacer cut inside and struck a sweet effort towards goal with bend which took a slight deflection on its way into the back of the net.

In turn, if Barcelona weren’t already monitoring his progress on his loan spell, they will certainly have been alerted to his impact on his competitive debut as he was also key in Dortmund’s first goal.

Given the lack of quality and depth behind Luis Suarez at Barcelona up front, it remains to be seen if Alcacer can play his way back into the club’s plans moving forward. Nevertheless, for now he’ll be focused on making a positive impression at Dortmund this season.