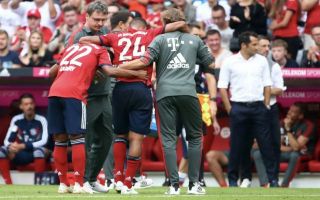 Bayern Munich will be without Corentin Tolisso and Rafinha for several weeks after both men sustained ligament damage against Bayer Leverkusen on Saturday.

Bayern continued their 100% start to the new Bundesliga season with a 3-1 win against Leverkusen yesterday, as Tolisso, Arjen Robben and James Rodriguez hit the back of the net for the home side.

The visitors opened the scoring after just five minutes when Wendell scored from the penalty spot, but from then on Munich took control to overwhelm their opponents in a bad-tempered affair.

According to Bayern’s official website, Tolisso faces months on the sidelines after suffering cruciate ligament damage in his knee during the game, while Rafinha was lucky to avoid the same level of damage following a ridiculous challenge from Karim Bellarabi, which earned the striker a straight red card.

Unfortunately, we can confirm that @CorentinTolisso has suffered an ACL tear and is set for several months out ?@R13_official also suffered ankle ligament damage and is out for a number of weeks ?

A partial ligament tear in Rafinha’s ankle should keep him out of action for a few weeks as this shocking double-injury blow comes at the worst possible time for the Bavarians with the Champions League kicking off in just two days.

Niko Kovac must now galvanise his squad ahead of Wednesday night’s trip to Portugal to face Benfica in their opening game in Group E, which will be a tough test of the team’s credentials in this year’s competition.

Bayern were knocked out at the semi-final stage last season at the hands of eventual winners Real Madrid, despite managing to outplay their illustrious opponents over two legs.

Supporters will be hoping the club can go one better in 2019, however, they will now have to negotiate the early stages of the tournament without two key members of the squad.

Tolisso has emerged as a vital part of Kovac’s midfield at the start of the season, while Rafinha has once again been a reliable fixture in the starting XI at right-back. Only time will tell whether or not Saturday’s game against Leverkusen ends up having greater repercussions for the club over the next few months, but there is no doubt that Bayern will have to adapt to losing the unlucky pair very quickly.