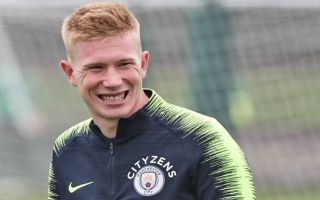 Manchester City midfielder Kevin De Bruyne is hopeful he could recover from injury in time to face Manchester United in November.

The Belgian has missed the last four games of City’s Premier League campaign after sustaining a knee injury in training and is expected to be out for another couple of months.

The 27-year-old playmaker was arguably the club’s standout player during their run to the title last season, earning widespread acclaim for his dynamic displays in the middle of the park and he carried that form onto the international stage with Belgium over the summer.

De Bruyne was fantastic as Belgium finished third in the World Cup finals in Russia, re-emphasising his status as one of the most talented midfielders of his generation and he had been targeting another strong campaign at club level upon returning to the Etihad.

Unfortunately, he has been dealt a setback with this latest injury, but in a surprising turn of events, the City maestro has reportedly insisted that he could be available for selection when Pep Guardiola’s men face arch-rivals Man United on November 11 – according to the Daily Star.

In De-Bruyne’s absence, the English champions have managed to win 10 points out of a possible 12, most recently dispatching newly-promoted Fulham 3-0 on Saturday.

However, it is clear that the Citizen’s are missing their main man in midfield, as they have so far struggled to hit the heights they reached throughout the year last term, particularly against Wolves at Molineux in a 1-1 draw.

City kick off their latest Champions League campaign against Lyon on Wednesday and supporters will be hopeful of another win to keep Guardiola’s side heading in the right direction.

De Bruyne will have to bide his time before making a much-anticipated return, but fans will be excited at the prospect of him featuring against their local rivals in his first match back.