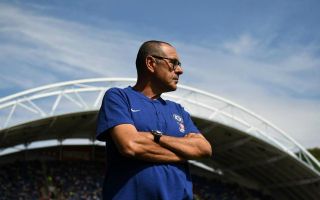 Chelsea manager Maurizio Sarri believes that Manchester City and Liverpool are favourites for the Premier League title ahead of his side.

The Blues secured their fifth successive win of the season on Saturday, thrashing Cardiff City 4-1 at Stamford Bridge, despite going behind early on in the match.

Eden Hazard scored a superb hattrick before Willian added some gloss to the scoreline late on after Sol Bamba had given the away side the lead after 16 minutes.

Neil Warnock’s men joined Huddersfield, Arsenal, Newcastle and Bournemouth as the latest team to go down fighting against Chelsea in the early stages of the 2018-19 campaign, with West Ham next up for the Blues on Sunday at the Olympic Stadium.

According to the Daily Star, despite their perfect start to the year, Sarri is refusing to get carried away with his team’s recent form, insisting that Chelsea and Liverpool are still better than them at this stage, as he told reporters post-match: “I cannot change my mind for one match.

“I think that at this moment Liverpool and Manchester City are another step than us. But I think we can improve.

“My target is to be the best team in England, but not in one month. Maybe one season, maybe a little more. But our target is this.

“But at the moment, I repeat, for me in my opinion Liverpool and Manchester City are better than us.”

Before their next Premier League outing, Chelsea must turn their attention to the Europa League on Thursday night, as they travel to Greece to face PAOK Athens.

The 2013 winners were drawn in Group L alongside the Greek outfit, Bate Borisova and Vidi FC, after finishing 5th in the League last season to just miss out on qualification for the Champions League.

Supporters will expect Chelsea to emerge victorious in both of their fixtures in the next seven days as the tough games start to come thick and fast, which should be entirely possible if they can continue to play with the attacking verve and freedom they have shown so far.