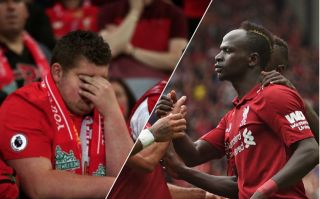 Despite Liverpool managing to beat Spurs 2-1 at Wembley on Saturday, a fair number of fans took to Twitter to brand forward Sadio Mane selfish for a specific incident that occurred during the match.

Jurgen Klopp’s side kept up their perfect start to the Premier League season at Wembley, as goals from Georginio Wijnaldum and Roberto Firmino secured all three points for the Reds.

The away side had a whole host of chances in both halves, however Liverpool failed to take the majority of them as they ended up crawling over the line come the end of the match.

One of the Reds’ best chances came in the second half, as Mane, Mohamed Salah and Naby Keita found themselves in a 3-on-2 situation in Spurs’ penalty area.

The Senegalese international decided to square the ball to Keita instead of Salah, who was in a better position, as the midfielder saw his effort blocked.

Mane’s choice of pass didn’t sit too well with fans, as some went onto social media to brand the 26-year-old as “selfish”.

It’s a bit harsh to brand the winger as that considering it was just one mistake in a match where he, overall, played quite well.

However, that didn’t seem to cross these fans’ minds, as they flocked to Twitter to slate the forward for not passing to Salah yesterday.

Mane so bad and selfish pic.twitter.com/JP1FPW45Ou

Manè, I know Salah stole your thunder last season. But don't be unfortunate, football is a team sport, pass the damn ball to him!!
Football is a team game in which all players cooperate to win their team.
Mane is a selfish who loves himself. pic.twitter.com/IsLGjoOoVS

@LFC tell mane he should be passing to salah. He's being over selfish

@LFC Please fix this you have a very tough table this month MANE will ruin it
He is so selfish and just don't want @MoSalah to score pic.twitter.com/lRu8oQciXN

Mane opting to pass to Keita instead of Salah made him annoyed to try and go on by himself instead of passing to Sturridge, which made Klopp mad.

Message to selfish mane :You have to play for the team not for yourself . To be a star is not only by scoring by yourself , it's an attitude and your attitude toward Salah will make you lose liverpool fans

I noticed several times in last few matches where Mane seems obsessed to either pass to Keita or else be selfish even though other players are better placed. The below is another example. Hope this is a wrong illussion and that it is not the case. #LFC, #Mane #Salah https://t.co/7eeMduWBPf