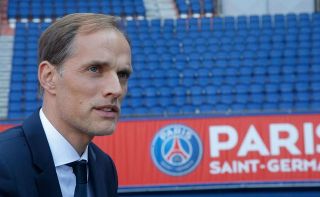 Paris Saint Germain boss Thomas Tuchel has revealed that he was unwilling to risk Neymar against Saint Ettiene with Liverpool on the horizon.

PSG continued their 100% start to the new Ligue 1 season on Friday, securing a 4-0 home win against Saint Etienne. Goals from Julian Draxler, Edinson Cavani, Angel Di Maria and Moussa Diaby wrapped up a comfortable win for the French champions, as Neymar was forced to watch on from the sidelines.

After featuring in both of Brazil’s friendlies during the international break against the USA and El Salvador, the 26-year-old returned to club duty in Paris on Wednesday and had hoped to play a part for Tuchel’s men in their latest domestic clash, however, the German coach had other ideas.

Neymar has made a blistering start to the new season, scoring four goals in PSG’s opening four games, but he wasn’t given the opportunity to add to that tally last week, after talking with Tuchel on Friday morning.

According to The Express, the Brazilian told his manager he didn’t know whether or not he was fully fit to participate against SaInt Ettiene, which immediately set off alarm bells in Tuchel’s head ahead of Tuesday night’s Champions League battle against Liverpool.

The 45-year-old coach told reporters: “Neymar and I spoke on Thursday.”

“I told him that he was not going to play and that he could not train. However, Neymar felt good and took part in the whole session.

“That night, he was unable to sleep.

“I asked Neymar at 10 GMT on Friday how he was, and his reply was ‘I do not know.

“When he told me that, it was an alarm in my head.

“Neymar played 90 minutes on Wednesday with Brazil, so I did not want to take any risks.

“Together, we decided that he would not play.”

PSG and Liverpool were drawn together in Group C for the first stage of this year’s European Cup competition, alongside Napoli and Red Star Belgrade.

The Reds will now have to face the prospect of a fully rested and raring to go Neymar – who signed for the Parisians for a record fee of £200 million back in 2017, as per BBC Sport – along with the likes of Cavani and Kylian Mbappe in the PSG attack.

Liverpool managed to reach the final of the competition last season, where they lost out to Real Madrid in the final, whereas PSG were knocked out by Los Blancos in the last-16.

It is about time that the French giants made an impression on the Champions League and they will have their next opportunity to do so in two days time at the Parc Des Princes against Jurgen Klopp’s formidable side.