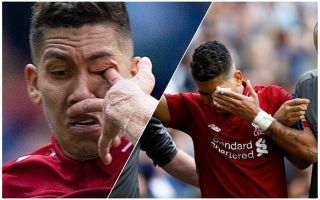 Liverpool boss Jurgen Klopp has conceded that a late decision will be taken on Roberto Firmino as to whether he’ll play against Paris Saint-Germain.

The Brazilian international sustained an eye injury after a clash with Jan Vertonghen in his side’s 2-1 win at Wembley on Saturday.

Having been forced off in that game, question marks were raised over how serious the injury was and whether it would keep Firmino sidelined for the foreseeable future.

Fortunately, it sounds as though there is no serious damage, as per Klopp’s comments below, but the German tactician wasn’t able to confirm either way if his preferred striker to lead the Liverpool line would be able to feature against PSG when they visit Anfield for their Champions League opener on Tuesday night.

“No idea, to be honest. He is much better,” he is quoted as telling the club’s official site. “We all see the picture and we were massively worried. But all these worries are away so he will be fine. If he will be fine for tomorrow, I don’t know in the moment.

“We are obviously in close contact with him and it improved already – but in this moment I can’t say if he will be available for tomorrow.”

There is undoubtedly a big difference when Firmino is not on the pitch, as aside from his attacking qualities, his pressing and work ethic off the ball ultimately sets the tone for the rest of the side behind him.

Daniel Sturridge replaced him against Spurs and will likely do so on Tuesday night if he isn’t available, and while the 29-year-old does have his own strengths and qualities, he arguably can’t replicate what Firmino offers as an all-round package and so his absence will be a blow for the Reds.

Time will tell though if he has recovered from the issue in time to take his place in the line-up or if Klopp is indeed forced into an unwanted change.