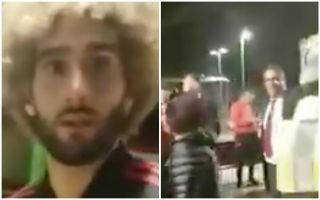 While it started out quite friendly, this passenger eventually got himself escorted away from the Man Utd players while they waited for their train home.

The incident took place after their win over Watford on Saturday evening, as the players and club officials opted to take the train home.

After initially congratulating United striker Romelu Lukaku on the win, the fan was then approached by a member of the security staff after Marouane Fellaini took exception to being filmed.

The mood evidently changed at that point as the passenger began to take a different tone and became a little more confrontational before two police officers arrived to escort him away from the Man Utd players and further down the platform.

On one hand, it all looked pretty innocent and the man filming should be allowed to stand wherever he wants in a public space. However, perhaps the club officials were right to involve the police as they were simply doing their job and making sure the players were safe and were not attracting unwanted attention.

Still, the video below is likely to spark a reaction and some level of debate…

Silly behaviour from camera guy. With such a tone, the guy with the camera had one objective and that was to spark a reaction from United players by pestering them ? pic.twitter.com/OJ7CzSxDtB