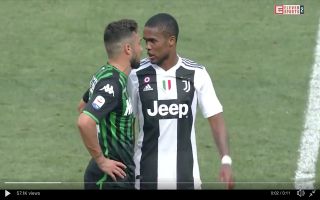 It has been confirmed by Lega Calcio that Juventus ace Douglas Costa will face a four-game suspension after spitting at Sassuolo’s Federico Di Francesco.

The incident came in Juve’s 2-1 win over Sassuolo in Turin on Sunday, with the Brazilian international fortunate not to receive a red card in the build-up to it.

It appeared as though he not only tried to catch his opponent with an elbow but then proceeded to push his head into that of Di Francesco’s right in front of the referee.

That was deemed to be worthy of only a yellow card, but after an intervention from VAR, Costa received his marching orders as replays caught him spitting at the Sassuolo defender in a vile act as they continued to argue.

Now, as seen in the tweet below from Sky Sport Italia, it has been confirmed that the 28-year-old will now miss four domestic games, which includes a crucial clash with Napoli on September 29.

Coach Massimiliano Allegri has great quality at his disposal in that area of his squad and so Costa’s absence is unlikely to hurt them too much. Nevertheless, the incident certainly doesn’t reflect well on the club’s image as a whole either, and so it remains to be seen if the Turin giants take action too…

This is going to be a huge story in world football. Douglas Costa spits in Federico Di Francesco’s mouth during the #Juve and #Sassuolo game. pic.twitter.com/IXyYDClct8