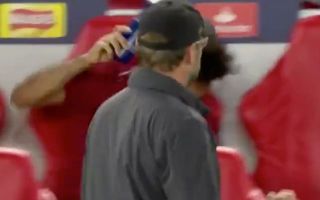 As expected, the Brazilian’s goal sparked wild scenes of celebration around Anfield, but some fans and viewers were left asking about Mohamed Salah’s reaction.

As seen in the video below, the Egyptian international doesn’t look particularly pleased after the goal goes in with Jurgen Klopp celebrating in front of him, as he appears to angrily throw his water bottle to the ground.

In fairness, there is probably a more innocent explanation for it as he may well have merely been frustrated about his own performance, particularly giving the ball away in the build-up to Kylian Mbappe’s equaliser.

There’s no real reason for him to be upset with his side sealing a win, and so perhaps it was just his way of showing relief that his mistake didn’t cost the Reds.

Nevertheless, there were still a number of Twitter users questioning it after spotting it in replays, as seen below, with the BT Sport studio panel also discussing it and insisting that it must have been his own way of celebrating the win rather than anything negative.

What’s up with Salah’s reaction ?

Salah just pissed with him self I guess.. Wish he can do more..

The matter appeared to be cleared up later on following further replays, with the one below showing Salah initially celebrating the goal before the camera panned back around to show him throw his bottle.

Ultimately, it looks as though the Egyptian international was probably just relieved and disappointed with his own performance on the night…