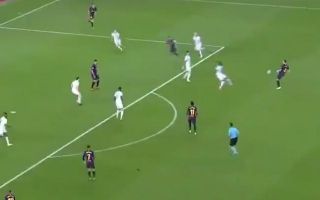 Barcelona cruised to a comfortable win over PSV in their Champions League encounter on Tuesday, with Lionel Messi unsurprisingly influential.

The Argentine icon had given his side the lead with a wonderful free-kick, with Ousmane Dembele doubling their lead with an excellent goal of his own.

However, the La Liga champions weren’t done there as Ivan Rakitic picked up the ball just outside the box and lofted a great pass into the path of Messi, who did the rest and found the back of the net to make it 3-0, as seen in the video below.

Following on from their nightmare in last season’s Champions League quarter-final clash with Roma, coach Ernesto Valverde would undoubtedly have been desperate to see his side make a confident start to the new European campaign.

He certainly got that against PSV, as Barcelona kicked things off with three points and with Messi making an immediate impression on the competition this year as he went on to bag a hat-trick to make an early case to end up as top goalscorer too.

And Messi makes it 3-0 to Barca! #ChampionsLeague pic.twitter.com/rfRGWN2qhy