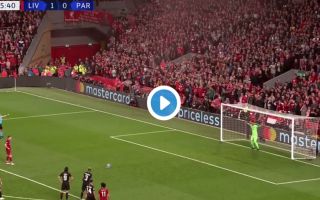 James Milner gave Liverpool a 2-0 lead from the penalty spot this evening, however Reds fans had little time to celebrate, as PSG hit back almost immediately through Thomas Meunier.

The England international, who’s having a blinder for the Reds tonight, wrapped up a fine first half performance for himself, as he buried his spot kick in the 40th minute.

However, Liverpool’s 2-0 lead was short-lived, as just minuets later, Belgian defender Thomas Meunier halved the deficit with a fine volley for the away side.

Despite this setback, Reds fans will still be optimistic that their side can come out on top in this one, as they’ve clearly been the better of the two sides in the first 45 minutes.

Here are clips of the quick-fire goals. Game on at Anfield!

Milner converts the penalty to make it 2-0 to Liverpool! #ChampionsLeague pic.twitter.com/dYoGSFsCgd

James Milner penalty to make it 2 – 0 to Liverpool. Milner has been everywhere ?#LFCPSG #UCL
pic.twitter.com/EggqyAWD8u

Meunier gets one back for PSG! #ChampionsLeague pic.twitter.com/ivKH79X5Ku

Boom PSG back in the game! Meunier with a reply 2-1 #liverpool #UCL #ChampionsLeague pic.twitter.com/9sLgOkSqOa