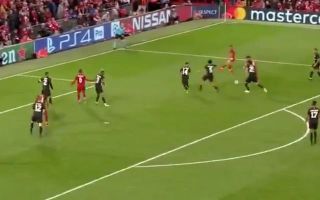 Liverpool striker Roberto Firmino came off the bench to score a superb winner for his side in their 3-2 victory over Paris Saint-Germain at Anfield.

Kylian Mbappe undoubtedly would have thought he had rescued a point for his side with a late goal for the visitors, but Firmino had other ideas as he struck in injury time to seal all three points.

The Brazilian international began on the bench with Daniel Sturridge starting after his injury concern at the weekend against Tottenham, but he wasn’t to be denied his moment. As seen in the video below, he produced a brilliant drilled finish to find Liverpool’s third and secure the victory.

Given the Merseyside giants were the better side for the most part, Jurgen Klopp will be delighted that they were able to find a late winner to kick-start their European campaign with a win.

As for Thomas Tuchel, he’ll have plenty to ponder given the lacklustre display he saw from his players at times, as they failed to match Liverpool’s energy and intensity in a great atmosphere at Anfield.

Nevertheless, it’s the Premier League giants who start with a win, and Firmino emerged as the hero with an excellent strike to reiterate his importance to this side.