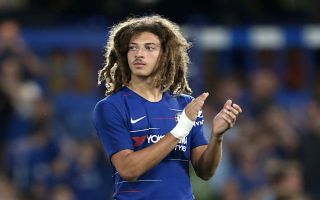 Defensive midfielder Ethan Ampadu has signed a new five-year deal at Chelsea which will keep him at Stamford Bridge until 2023.

The 18-year-old joined the Blues from Exeter City in 2017 and has since made seven first-team appearances for the club. The Welsh sensation is capable of playing in the heart of defence or in a holding role in the middle of the park and impressed last season when called upon in the Carabao Cup under then manager Antonio Conte.

Ampadu had his debut year at the club cruelly cut short through injury but he is now back fully fit and ready to contribute during the 2018-19 campaign, having already managed to amass four caps for Wales at international level.

According to Chelsea’s official website, the former Exeter stalwart put pen to paper on a new contract on Wednesday, extending his initial deal to commit his long-term future to the club.

Head to the Chelsea app to hear exclusively from the young Blue himself! https://t.co/QmZkmocGxt

Ampadu expressed his delight after the announcement was made, stating to reporters: “I’m really proud and happy. I’m looking forward to the next five years and all I have got to do now is continue to work hard, and hopefully good things will happen.”

Blues director Marina Granovskaia also added her congratulations to the teenager, praising him for his professionalism at such a young age.

“Ethan has shown great potential and unbelievable maturity since arriving at Chelsea a year ago,” said Granovskaia. “In this short time he convinced a lot of people with his exceptional quality and mentality and we look forward to watching him develop into a key player for the club over the coming years.”

Chelsea are currently setting the pace at the top of the Premier League table after a blistering start to the season, winning all five of their matches so far with new Italian boss Maurizio Sarri at the helm.

At the moment, Ampadu may find his opportunities limited but with the Europa League kicking off on Thursday and the Carabao Cup still in its early stages, the versatile defender could yet have a big impact on the team in the coming months.