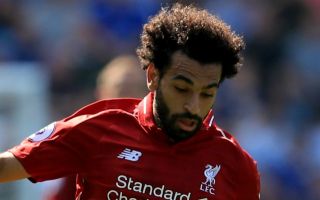 If there’s one concern for Liverpool fans at the moment it’s that Mohamed Salah looks some way off producing the kind of form that he showed last season.

In fairness to the Egyptian, he was always likely to struggle to live up to the insanely high standards he hit in his first year at Anfield, when he scored 44 goals in all competitions, won the Golden Boot, won PFA Player of the Year, and played a starring role in the Reds reaching the Champions League final.

LFC fans will no doubt hope Salah is firing at his best again soon, but for now, some are keeping pretty grounded and make the great point that the team still has six wins out of six without him being at his best.

That being the case, just imagine how good Liverpool will be once he’s back tearing defences apart again.

Chelsea and Manchester City have made great starts to the season as well, but it should definitely be a big concern for them that Liverpool have set this early pace despite clearly not even playing at their full potential yet…

Remember we won tonight with Salah as a passenger. Last year if Salah was in this poor form, what would have happened? Imagine when he hits his top form again. Think about that for a minute before you start criticizing Salah.

Speaks volumes of where this Liverpool side are at that Salah is nowhere near his best form yet, and they’ve still got 6/6 wins so far this season. Just imagine when he starts firing. And he will.

I think it’s too early to be worried by Salah’s form. He’s made a decent start despite 3 games without a goal yet the team have won every game. #LFC are evolving all the time and others are stepping forward which gives us a greater threat. He will still plunder a hatful of goals

Fair play to Liverpool who have started this season brilliantly. Team all working together. Can see them going up a gear when Salah finds his form. Could possibly be Man City's closest challenger this season

Your player of the season last season hasn’t hit his stride yet and you still 6 games & 6 Ws in no need to panic.Salah will find his form ??

As for Salah. Not quite firing yet. Which is great for us considering the start we’ve made. Mane Salah and Firmino all yet to hit top form.

What concerns me for the oppositions is Salah is not in form atm.. Imagine the poor team who will be on the receiving end of his wrath once he hits the ground as a king..#LFC #YNWA

Imagine when Salah is in form and when the Ox is back healthy.

With all this Salah having a bad game shit out of the way, for fuck sakes, lookhow far we've come, where one of our BEST players can have an off night, and we still win. Years back, if we lost a big player to injury, or they're off form, we're done. Not anymore. Get in Reds!!