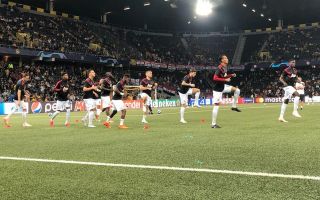 Manchester United fans can expect to be excited with right-back Diogo Dalot ahead of the youngster making his debut for United in tonight’s Champions League fixture against BSC Young Boys.

19-year-old Dalot joined United’s ranks this summer from Porto for a fee reported to be £19m according to BBC Sport. Fans were shocked by the youngster’s signing – especially for such a large transfer fee given the fact many fans hadn’t heard of the youngster before.

There are definitely high hopes for the young full-back who has impressed fans with his versatility considering his young age. Dalot can operate as a right or left back and has also been deployed on either wing during his time with Porto.

Manchester Evening News reporter Ciaran Kelly had an exciting update for fans ahead of this evening’s fixture:

Should Dalot be able to offer some much needed energy going forward in the wide areas United could well be a force to be reckoned with this season.

Dalot is well regarded for his impressive physicality and ability going forward.

Mourinho said: “Diogo is an extremely talented young defender with all the qualities to quickly become a great player for this club. He has all the attributes that a full-back needs: physicality, tactical intelligence and technical quality, combined with a Porto Academy mentality which prepares players for the maturity they need at the professional level.”

“In his age group, he is the best full-back in Europe and we all believe he has a bright future ahead of him at Manchester United.”

United fans will be confident Dalot won’t let them down as he plays for the firs time for the club tonight.