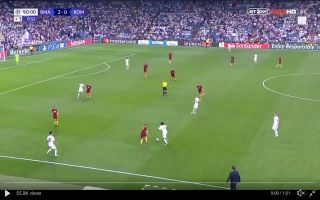 Real Madrid forward Mariano Diaz made his second Madrid debut in style scoring a stunning effort to seal a 3-0 victory over Roma in their first Champions League game of the new season.

Mariano was substituted on for Gareth Bale with the intention to see the game out but the forward flipped the script and made headlines for himself.

This was Mariano’s second debut for Madrid after joining Los Blancos this summer from Lyon, Madrid’s use of their buy-back clause definitely paid dividends tonight.

In the 91st minute of the match Marcelo slotted the ball into Mariano’s path, the striker then took the ball past defender Kostas Manolas before curling the ball into the top corner. Mariano grasped the opportunity to don the infamous Madrid No.7 shirt with both hands.

Check out Mariano’s wonderful goal below:

On a night when Real Madrid's old #7 dominated the headlines…

Real Madrid's new #7 made some of his own!

Elsewhere in Juventus’ Champions League tie with Valencia Madrid’s former No.7 Cristiano Ronaldo made headlines for all the wrong reasons being sent off for violent conduct in Juventus’ 2-0 victory.

Following Ronaldo’s departure to Juventus questions had been asked as to who could fill the goalscoring void that the 5 time Ballon d’Or winner leaves and Mariano certainly showed fans he is up to the challenge.