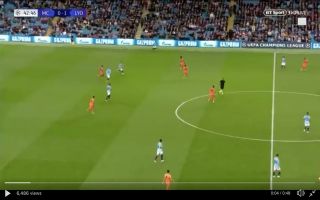 Delivering an assist in the first half of Lyon’s Champions League encounter against Manchester City was not enough for superstar Nabil Fekir.

In the 43rd minute of the match City’s Aymeric Laporte folded under pressure from Fekir who tackled the defender before running towards goal and shooting low into the bottom right corner of Ederson’s goal, doubling Lyon’s lead going into half time.

It's gone from bad to worse for Man City… ?

Nabil Fekir presses high, pounces on a mistake, and buries the finish!

It's no wonder Liverpool wanted him ? pic.twitter.com/2csUGx17YO

Fekir’s stunning solo goal is no surprise for a player who was subject to immense transfer speculation this summer.

The Express reported that Fekir had agreed to join Liverpool in a mega move before Lyon suddenly decided to pull the plug on the attacker’s transfer.

Lyon fans will definitely be over the moon with the club’s decision to keep hold of their superstar this summer.

Manchester City have a mountain to climb in the second half of tonight’s game if they are to have any chance of winning any points in their opening Champions League encounter.