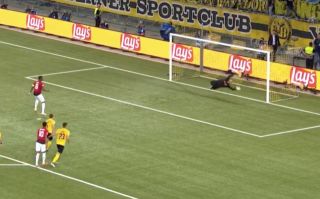 Paul Pogba scored a penalty with his trademark slow run-up this evening, as he doubled Man United’s lead against Young Boys in the Champions League.

The Frenchman, who gave Mourinho’s side the lead a few minutes earlier with a fabulous left-footed strike, put the away side in a comfortable position as he bagged a super penalty just before the break.

Pogba strolled up to the ball for his spot kick his trademark slow run-up, something we saw him pull off when he scored penalties against Brighton and Leicester earlier this season.