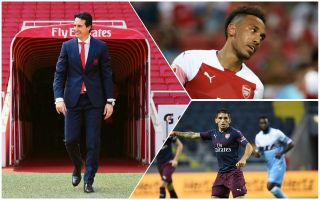 A fair few Arsenal fans on Twitter this evening are excited by the changes made by manager Unai Emery for the Europa League clash against Vorskla Poltava.

Two big-name summer signings who haven’t seen much action yet this season – goalkeeper Bend Leno and midfielder Lucas Torreira – have both been given a chance to impress tonight.

Petr Cech looks over the hill, so it’s a bit puzzling as to why Leno hasn’t had more opportunities after impressing at his former club Bayer Leverkusen.

Torreira is also surely an upgrade on the likes of Granit Xhaka in midfield, though youngster Matteo Guendouzi has surprisingly been preferred by Emery up until now.

Arsenal fans seem excited about this new-look side taking to the pitch tonight as they hope to get their European campaign off to a strong start.

Leno and Torreira getting their first starts!! #coyg #arsenalfc

Arsenal Team. Really happy with this! Hope to see Emile Smith Rowe and Nketiah off the bench.

Torreira, Lichtsteiner and Leno start. I am a happy person. ?

Good line up this, Torreira and Leno ? https://t.co/rUySLKXINX

The north Londoners made it to the semi-finals last season before losing to eventual winners Atletico Madrid.

Emery, however, has won this competition three times so could see this as a fine opportunity for some silverware in his first season in charge at the Emirates Stadium.