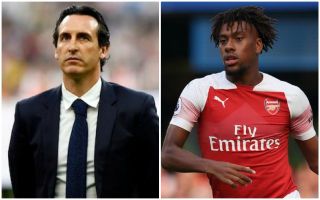 Arsenal manager Unai Emery and midfielder Alex Iwobi expressed quite different opinions on the atmosphere at the Emirates Stadium this evening.

The Gunners got off to a winning start in the Europa League with a 4-2 win over Vorskla Poltava, but the clear elephant in the room was that not that many fans showed up to watch it.

The Europa League is not known for attracting that much interest, with a club like Arsenal often putting a lot into simply qualifying for the Champions League every season, even if they’ve never really been contenders to win it.

This kept Arsene Wenger in a job for many years, though his successor Emery, by contrast, has built his reputation from winning the competition three times during his spell as Sevilla manager.

Emery on attracting more fans to EL home games: “We need to show our supporters we are excited for this competition. We want to do good in this Europa League. It’s step-by-step & I’m sure they will come here more in the competition.” #afc pic.twitter.com/oqLjq0DGqS

He therefore hopes Arsenal fans will start to show more interest as the tournament goes on, as quoted by Twitter account afcstuff after the game.

Iwobi, meanwhile, seemed to think the Emirates was rocking anyway.

We’re not sure what game he was at, but this is what he said afterwards, presumably not sarcastically…

Great To Start The @EuropaLeague Campaign With A Win ?
Fans Were Amazing , Emirates Was A Party Tonight #YaaDigg ? pic.twitter.com/8LEwAelCWM