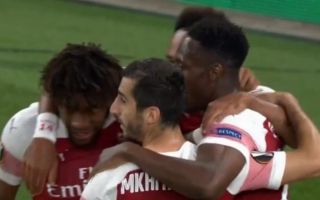 Pierre-Emerick Aubameyang has scored a superb goal on his European debut for Arsenal this evening as they go 1-0 up against Vorskla Poltava.

The visitors actually started out in a promising attacking position before being hit on the break by the Gunners in a devastating move.

Henrikh Mkhitaryan and Alex Iwobi were involved with some fine passing that set up Aubameyang for a clinical finish low into the corner.

The Gabon international has been a fine signing for Arsenal since his January transfer from Borussia Dortmund, and could be crucial for the club if they are to progress in this competition this season…

The first European goal under the Unai Emery era, is scored by Pierre-Emerick Aubameyang ?