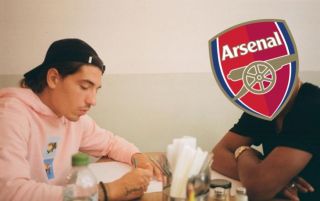 A number of Arsenal fans are getting a bit over-excited as Hector Bellerin has been snapped hanging out with former Gunners winger Serge Gnabry on Instagram.

The Spain international uploaded the image of himself and the Germany international, now with Bayern Munich, and it seems many Gooners would love to see him get a second chance at the Emirates Stadium.

MORE: (Photo) These Arsenal fans get nostalgic as Arsene Wenger is reunited with Thierry Henry

The 23-year-old had some chances in the first-team at Arsenal earlier in his career, but was strangely overlooked despite some impressive displays.

In total, Gnabry played just 18 games for the north London giants, scoring one goal, but he’s since looked back to his best in the Bundesliga, first with Werder Bremen and then with Hoffenheim on loan before winding up at Bayern this season.

Judging by the comments section on this Instagram post, many Arsenal fans want Bellerin to use this time to talk the player into a move back to the Emirates. Good luck with that!

‘Bring him back’ reads one comment, while another fan admits he was ‘gutted’ when he left.

‘Tell him it’s time to come home’ pleads another fan to Bellerin.