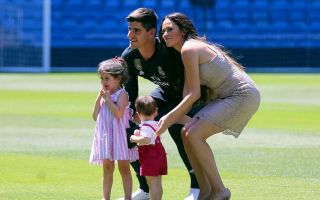 Some Chelsea fans really need to get a life as they bombard their former goalkeeper Thibaut Courtois with abuse on his Instagram page.

The Belgium international’s departure from Stamford Bridge has clearly left a sour taste with some Blues supporters as he left on the cheap after running down his contract to its final year.

One Chelsea fan account on Twitter recently went on an epic rant to sum up many fans’ feelings towards Courtois, while others enjoyed him conceding a sloppy goal for Real Madrid against Athletic Bilbao a couple of weeks back.

It seems the 26-year-old cannot do anything without attracting fan wrath from supporters of his old club, though it must be stressed this lot are probably a bit of an angry minority.

Today, Courtois posted a sweet photo of himself with his young daughter – something he made clear publicly that was a major factor in his decision to move to Madrid as they’d been so far apart before with him in London.

Still, rather than showing a human side, many fans are now taking this as an opportunity to troll Courtois with ‘snake’ emojis and other nasty comments.

‘Hope she doesn’t take after your snakey cunning way’ read one comment.

‘How is bench you snake’ read another, in reference to Courtois often finding himself behind Keylor Navas in the pecking order so far this season.

‘Navas is better than you’ – you get the theme here.

Hopefully Courtois just doesn’t bother reading this kind of rubbish from bitter keyboard warriors with nothing better to do!