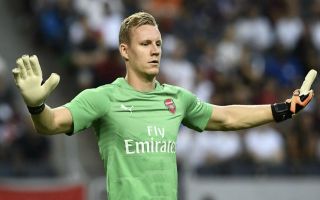 Arsenal goalkeeper Bernd Leno believes that he is ready to start in the Premier League, with Petr Cech currently ahead of him as the club’s number one.

Leno made his debut for the Gunners on Thursday night against Vorskla in the Europa League, having spent the first five games of the season on the bench following his summer move from Bayer Leverkusen.

The German shot-stopper conceded twice at the Emirates as Arsenal ran out 4-2 winners, ultimately helpless to stop either of the goals on an otherwise solid night of work.

The 26-year-old had widely been tipped to usurp Cech between the sticks, but it appears that Unai Emery has other ideas for the time being, despite his obvious talents.

According to the Evening Standard, Leno revealed his frustrations having expected to feature more prominently in the team, before insisting that he will keep working hard to improve his position, as he told reporters on Friday: “I came to the club to play every game.

“But I think to move to a bigger club, another country, it needs maybe a little bit of time.

“It is a bit frustrating but I keep calm and work very hard to improve. The coach always makes the starting XI because of the performance.

“I think it could change, not every week, but he will change a lot. He didn’t say the League is Petr’s competition and the Europa League is mine. I will work every day hard to play more games.”

Unair Emery will be preparing his side for another home game against Everton on Sunday, in their 6th game of the new Premier League campaign.

Four wins in a row ?

Let’s try and make it five on Sunday ? #UEL pic.twitter.com/o2UTG3AdK1

A total of 9 points out of a possible 15 so far and three wins on the bounce represents a solid start for the Gunners and supporters will hope that their good form continues with another three points this weekend.