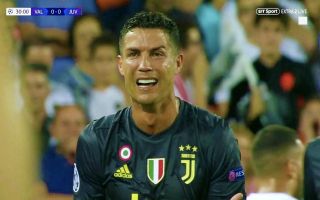 Atletico Madrid manager Diego Simeone insists that VAR should be introduced in the European Cup after Cristiano Ronaldo’s sending off against Valencia.

The Juventus striker was dismissed against the Spanish outfit at the Mestalla on Wednesday after an innocuous clash with Jeison Murillo off the ball, in a controversial incident which marred the Champions League contest.

Ronaldo is likely to face a ban, despite replays clearly showing that he didn’t do anything to the Valencia defender, which could see him ruled out of the Old Lady’s next European clash against Young Boys.

According to Four Four Two, Atletico boss Simeone was shocked by the decision and has called for technology to be introduced in the competition, as he told reporters on Friday: “With VAR, seeing the way in which Ronaldo was sent off, we have to pay attention to what is done.

“He did not seem to have done anything and was dismissed. The referees have help and that conditions what happens in the field.

“From our place we have to make the game that we believe and we will face a tough team.

“I feel like VAR is always in favour of justice in the game, for sure it will evolve with time.

“My feeling is that it brings more justice to the game than any other thing, of course it can make mistakes and let’s hope they will fix them.”

VAR was successfully used at the World Cup in Russia over the summer and managed to improve the overall fairness and quality of the competition as a whole, despite many expert’s initial reservations over the system.

The Champions League is the most important tournament at club level in Europe with so much on the line and in the wake of Ronaldo’s latest grievance, it is highly likely that technology will be introduced sooner rather than later.

Juventus managed to win 2-0 against Valencia without their star man, but the impact of the red card could have been more severe for the team in different circumstances.

Simeone spoke days after enjoying a happy return to the Champions League with Atletico on Tuesday, as he watched his team secure a 2-1 win against AS Monaco in France.