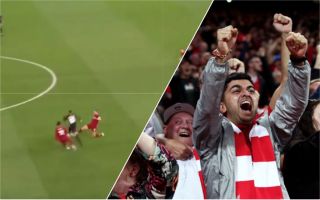 It’s fair to say it was an overall enjoyable night for Liverpool fans on Tuesday night earlier this week.

Jurgen Klopp’s side scored a winner in extra time to beat French giants and European powerhouse PSG in their first game of their Champions League campaign this season.

Goals from Daniel Sturridge, James Milner and Roberto Firmino were enough to see the Reds overcome PSG and go top of their Champions League group with one game played.

However, it isn’t any of the goals or skills that were on shown in the match that has Liverpool fans going crazy, but a particular moment from midfielder Jordan Henderson.

A clip has emerged online of Henderson winning the ball back from PSG three times in a very short space of time, a sight that is clearly a joy to behold for Liverpool fans given their reaction to it.

Despite PSG’s side containing stars like Edinson Cavani, Neymar and Kylian Mbappe, Henderson will still able to tackle all in his path, helping the home side win back possession almost instantly three times within the clip.

The clip, which can be viewed above, is very impressive from the England international to say the least, and it certainly has these Liverpool fans going crazy for him!

Here are a few tweets from supporters lavishing the midfielder for this moment in the Reds’ win over PSG on Tuesday.

In fairness, Henderson does do well here…

If this was Kante…

Henderson tackled anything that came his way. Even the Liverpool players. ?
Jokes apart he is one of the best holding midfielders in premier league.

This is brilliant…we almost scored as well which shows how important winning the ball back is. Love the fact that he wiped out Joe as well, who looked hurt, until Hendo taps him to say….up ya get lad!!!

Would've been perfect if he didn't nearly cripple Gomez for the last one.