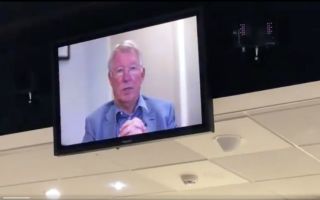 On this day in 1994, Scholes made his senior debut for United in the League Cup against Port Vale, beginning his incredible journey with the club that would span almost 20 years.

He achieved all those great things under Ferguson’s stewardship, who is currently in recovery following a brain haemorrhage earlier in the year.

As the Manchester Evening News reports, the former Red Devils chief looked in fine health in his cheery message to Scholes on Friday, as he called the Englishman the ‘perfect’ player.

Sir Alex can’t be here tonight but has sent a message. pic.twitter.com/PGDskZOjI3

Great to hear from Sir Alex tonight after his recent illness and glad to see he’s on his way back to full full health. pic.twitter.com/Y9rbZqwYhh