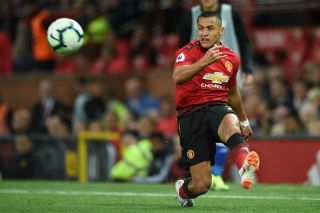 A growing number of Manchester United fans have absolutely had enough with flop signing Alexis Sanchez after another anonymous performance against Wolves.

United just drew 1-1 with Nuno Santo’s side at Old Trafford, despite starting strongly and taking the lead through a fine Fred goal from an even better Paul Pogba assist.

Things turned sour in the second half, however, as United failed to build on their lead and a Pogba mistake allowed Wolves in for Joao Moutinho to score a well-taken equaliser.

While not all of this can be blamed on Sanchez, he did have another poor game and fans will have expected much more from a player who arrived with so much hype in January.

The Chile international was one of the best attacking players in the world at Arsenal, but this stat below just sums up how much his form has dipped for the Red Devils…

Alexis Sanchez for Barcelona:
Averaged a league goal every 148 minutes.

Alexis Sanchez for Arsenal:
Averaged a league goal every 161 minutes.

Is it too late to get Alexis Sanchez back at arsenal? Coz mans is struggling badly at piano fc. ???

Sanchez has been a big big flop at United! Can’t remember him having one good game.

Sanchez is honestly a bigger flop than di maria for @ManUtd ! He is so bad it is embarrassing at this stage, he should be out in China making some money instead of making a huge wage bill for #ManUtd instead, just terrible! #MUFC #MUNWOL

Sanchez has been a total flop so far at Manchester

Sell Sanchez in jan. Every new winger who has joined the pl recently is doing better than him. Why do we persist with the midget ffs