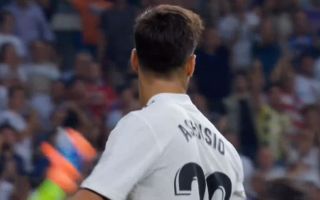 Real Madrid star Marco Asensio made fun of the lengthy VAR decision on his goal against Espanyol in tonight’s La Liga match.

As shown in the photo below, the Spain international celebrated his strike by pointing at an imaginary watch on his wrist, in reference to the lengthy wait from the officials to finally allow it.

In fairness, it looked a close call whether or not Asensio was offside in the build-up to his well-taken effort into the bottom corner.

Still, it is something VAR needs to work on if it is to really take off in the biggest games all over the world…