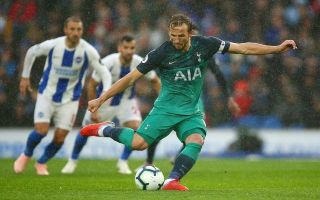 England captain Harry Kane scored from the spot just before half-time to give Tottenham the lead going into the break after a slow start against Brighton at the Amex Stadium.

Pressure was mounting on Kane prior to this evening’s match with the two-time Premier League Golden Boot winner not having scored a goal for Club or Country in nearly a month.

Spurs dominated possession in the first half with a staggering 78% to Brighton’s measly 22%, although Tottenham struggled to create clear cut chances that they could have taken advantage of.

In the 41st minute of the game Kieran Trippier fired a free-kick into the Brighton wall and a penalty was awarded by the referee as Brighton talisman Glen Murray raised his arms, blocking the ball.

Kane stepped up and punished Brighton for Murray’s mistake, regardless of Kane’s goal drought the 25-year-old is as reliable as they come from the spot.

Check out Kane’s thunderous penalty below:

Harry Kane converts from the spot after Kieran Trippier's free-kick was handled by Glen Murray to give Tottenham Hotspur the lead against Brighton.#THFC #COYSpic.twitter.com/PctsdjWzcJ

Tottenham are in desperate need of a win against Brighton with the side suffering a bad run of form following league losses to Watford and Liverpool as well as losing to Inter Milan on Tuesday evening in their first Champions League game of the season.