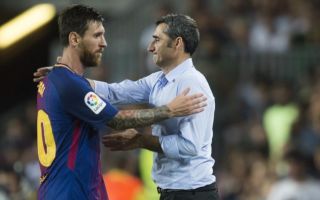 Barcelona will look to extend their 100% record to start the La Liga season when they host Girona at the Nou Camp on Sunday night.

The Catalan giants have picked up four wins in four games, scoring 14 goals and conceding just three. With Real Madrid leapfrogging them in the standings on Saturday night though, they’ll be eager to restore their early lead at the top of the table.

SEE MORE: Barcelona draw up five-man shortlist of replacements for influential figure should he depart in summer

They’ll look to do so against a Girona side that has done relatively well thus far, winning two and drawing one of their four games to sit in mid-table.

In turn, the hosts will undoubtedly be aware of the risk of underestimating them and Ernesto Valverde isn’t expected to make too many changes and take any risks despite his side being in Champions League action in midweek.

As suggested in our line-up below, he could opt to rest Sergi Roberto and Ivan Rakitic with Nelson Semedo and Arthur coming into the XI. Although, as per Sport, the latter has only just recovered from a bug and so it remains to be seen if he’s fit enough to start the game.

Nevertheless, with the expected attacking trident of Luis Suarez, Ousmane Dembele and Lionel Messi leading the charge, coupled with Philippe Coutinho and Sergio Busquets pulling the strings in midfield, Barcelona should have enough quality in the line-up to get all three points.

Samuel Umtiti and Gerard Pique will likely continue at the back, albeit the Frenchman will miss the next game in Europe due to suspension and so could potentially use that as an excuse to rest. Beyond that, it’s a strong Barca XI and they’ll be confident in their ability to make it five wins in five.